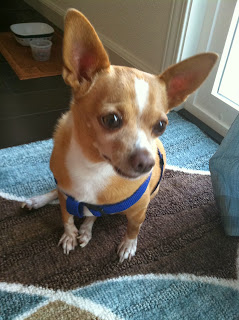 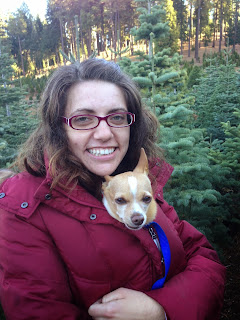 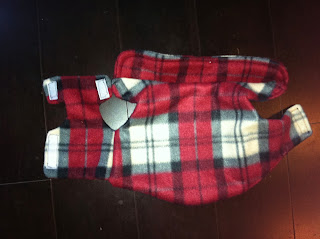 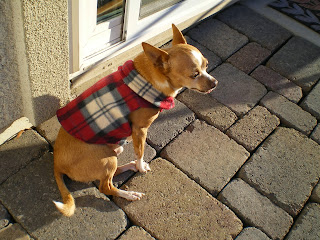 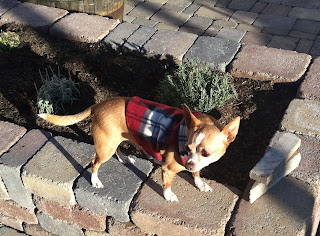 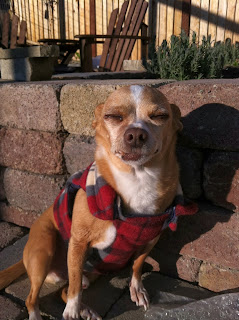 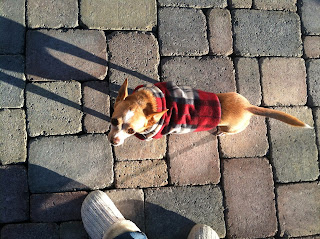 
Posted by Stephanie at 6:07 PM No comments: 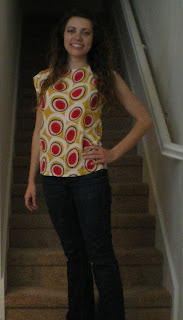 I bought this pattern for the blazer, which I made up like a year ago, and it came out horrible.  Very wide and short and boxy, which gave it an overall 80s vibe.  A wadder for sure.  I never blogged it though because it happened around the time my mom had cancer.

Something about the top caught my eye though, and when I saw this fabric (which I believe is a challis) on clearance for $3 a yard, this pattern immediately came to mind.  I bought this fabric a few months ago though and moved since then, and somewhere in the process of storage and moving some holes formed. There were four holes, lined up the way it was folded, so I know it wasn't a manufacturing error.  But with some creative placing of pattern pieces it worked just fine. 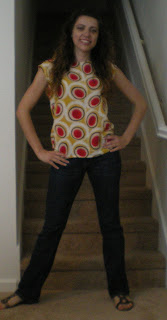 This pattern was super easy.  Only two pattern pieces! No zipper and no closures.  I cut a straight 6.  It slipped my mind to widen it at the hips, but this just gives it a more fitted look which I ended up liking.  In the past I don't think I would've worn something so loose on top, since that's my smallest area.  But as I mentioned in an earlier post, I lost a lot of weight and I'm still getting used to what works on my new body and what doesn't. Since only a small fraction of my old clothes fit, I've had many chances in various dressing rooms to try on different styles and such, but I'm still getting used to it.  I have a lot of thoughts about this that I may dedicate to its own blog post.

More details on my pattern review can be found here. 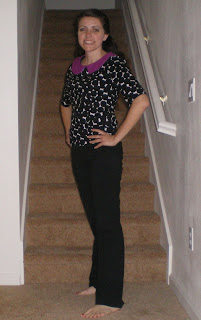 I'm really happy with it!  It's tight enough to show I have a body, but not uncomfortable. My only issue was with the side zipper.  I bought a 12 inch zipper as instructed on the envelope.  However, in the size I made (a zero) I had barely over 12 inches between armpit and hem.  This left like no space to fold a hem and no space at the top.  As a result, the zipper rubbed my armpit all day. I ended up breaking into the first aid kit, taking some gauze, and stuffing it in my armpit.  It worked! But definitely not a long term solution.  I think I'm going to hand sew in a little flap or something to cover the zipper.  Still wearable, and I'm still very happy with it.  If I were to make this again (which I may) I would lengthen it, which I think would look better and would fix my zipper issue.

Overall, I give it an A-, maybe a solid A if I resolve the zipper rubbing.

Click here for my pattern review link.
Posted by Stephanie at 5:52 PM 2 comments:

Back and ready for more!

While this is mainly a sewing/crafting blog, I want to address some personal stuff before moving on.  Feel free to scroll down to a brief sewing bit at the end.

I feel the need to address the year-long silence here on my blog.  About this time last year, on Easter Sunday actually, my mom checked herself into the hospital with abdominal pain.  It was diagnosed as pancreatic cancer and she passed away just 4 months later.  My mom and I were very close, and it was a painful experience to say the least.  She was only 46. While this was going on, I also got laid off from San Diego Unified and things fell apart with my now ex-boyfriend.

So while this sounds a little sad, and I guess it was at the time, it launched me in such a good life trajectory.  I ended up moving to Sacramento, where I have some family.  I got a job teaching 7th grade.  I lost 20 pounds.  And I have a new man in my life. I've been sewing a bit off and on in the past year, but things are finally really settled and I've jumped 110% back into sewing and dipping my toes back into my blog.

And now that that's off my chest, onto sewing matters! 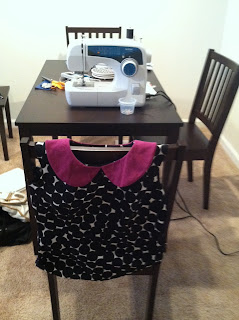 Waiting for sleeves and a hem!

I'm using a black and ivory stretch sateen that I think I bought from FabricMart, but it was years ago. For the contrast collar I'm using a fuchsia corduroy that has also been in the stash for a while. 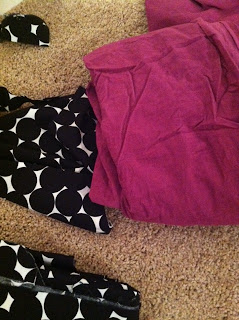 I told you I had some stuff for years- Look how wrinkled that corduroy was! 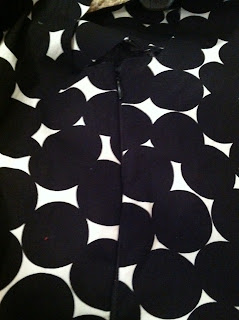 So invisible you can hardly even see it!


Look for some finished pics in a few days. :)
Posted by Stephanie at 7:42 PM No comments:

I love this blazer.  Absolutely love it.  Gaudy? Yes.  80s? Yes.  Look like I'm 75 and going to a business meeting in Honolulu?  Maybe.  And Gary has reminded me frequently of these facts.  But I don't care, I love it! 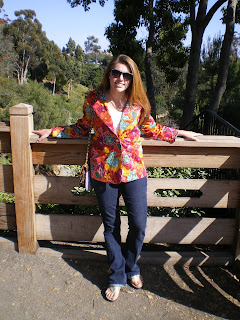 At the Japanese Friendship Garden in beautiful Balboa Park.
I've been a fan of blazers for a long while, particularly boyfriend blazers.  I have a white one, but I don't wear it much as I'm afraid of getting it dirty.  I ordered this fabric and I just thought it needed to be a blazer!

This fabric was a dream by the way.  It's a "floral jacquard stretch suiting" from Fashion Fabrics Club. I think it's mostly polyester.  It's fairly heavy, but not bulky.  It doesn't wrinkle and it sews nice and presses nice.  Just a dream to work with.  The lining (not pictured) is orange acetate. I hate acetate, but the price is right.  Not so nice to sew with, but slippery fabrics never are. 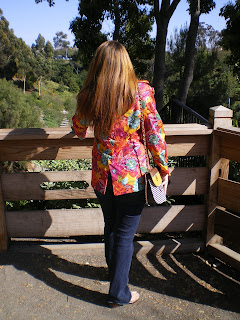 Sewing a blazer is hard.  There, I said it.  I used Simplicity 2340. I think the directions assumed that you had made a blazer before, and I haven't.  It took a lot of puzzling, especially the collar.  I redid the collar probably like 5 times.  I was carefully matching the small dots and large dots as instructed, but on the wrong pattern pieces because there are a million large dots and small dots!  I finally got that more or less figured out, but I never did figure out the back vent and I'm sure I did it incorrectly, but I don't really care, it works. However, if you have sewn a blazer before or have a reference book it's probably not so bad, and it wouldn't be so bad a second time around, if I were crazy enough to attempt it.

I'm not crazy about the fit either, which I think adds to the 80s-ness of it.  According to my upper bust measurement I'm a 12, but I went down to a 10.  I did a tissue fitting of the 10 and it was a bit snug, but I went ahead with it anyways.  In my sewing class my teacher said that a garment will grow about a half inch when changing from tissue paper to fabric, so I didn't worry about the snugness.  But this grew way more than a half inch.  If I were to make this again, I'd go down another size. 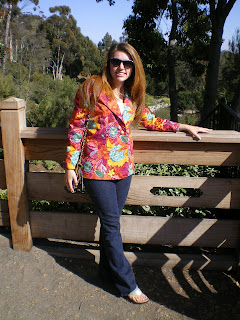 One last thing- the button. 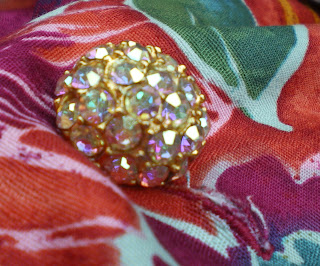 Gary hates the button, says it puts "the finishing touch on the granny look".  I told him granny chic is in, but he never listens to me!  Plus, this really is a granny button.  When my grandpa's sister died at the ripe old age of 82, I ended up with a hot pink, faux fur, mod 60s style coat with these buttons. (No idea if it was from the 60s or just a replica.  She was a good seamstress herself, I'm pretty sure she made the coat) I parted with the coat, but not before snagging the buttons.  It only took me about 10 years to find a use for one of the five buttons, but at least they can finally see the light of day!

Mahalo for reading all about my crazy jacket and aloha! (and I mean that in the goodbye sense)
Posted by Stephanie at 3:24 PM 2 comments: